What is the Dub’s Scheme and ‘Dubs’ Amendment ?  In May 2016 parliament passed the new Immigration Act 2016 which included the Dubs Amendment (Section 67)  relating to unaccompanied child refugees and asylum seekers in Europe (the ‘hotspots’ of Northern France, Greece, Italy ) who had no family links in the UK . This committed the government to offering sanctuary to some of these most vulnerable and at risk children,  living alone in unsatisfactory temporary camps or sleeping outdoors and in need of urgent protection. It was envisaged during the parliamentary debates that up to 3,000  lone children and young people would be resettled here from the EU and there was support across all the political parties for this. Sadly  just 480 places were subsequently offered. (A helpful Fact Sheet on both the ‘Dubs’ Scheme and Dublin 111 Family Re-unification is available here:    www.fullfact.org/immigration/ask-full-fact-dubs-and-dublin/)

When did it close and Why?

The Government announced in February ’17  that they were suspending the Dubs scheme in March, capping the numbers of children to be resettled here from Europe at just 350. This was later adjusted in April ’17 to 480 children. They argued that ‘official’ EU relocation schemes like ‘Dubs’ acted as ‘pull factors’ for traffickers and perilous journeys by sea- a claim widely contested. They also argued that LAs only had places for this number- again a claim widely contested by LAs themselves . There has been concern that there was not adequate or transparent consultation with Local Authorities and, reportedly, that 100s more offers of spaces were not included.

We believe Local Authorities in the South West  offered 130 places for ‘Dubs’ and these were subsequently included by the Home Office. (UPDATED info:  As of August 2018  DCC disclosed that 41 UASCs had come to Devon since 2016 under the different Transfer Schemes. They have not disclosed just how many of these arrived here under the’Dubs’ scheme.)

What Action have refugee organisations taken nationally and locally since 2017 as regards the ‘Dubs’ Scheme?

2.  National: In December 18 the Home office announced that the cut-off date for the ‘Dubs scheme’ will be removed following campaigning by charity Safe Passage and supporters. The cut- off date under the ‘Dubs scheme’ had previously meant that unaccompanied children arriving in Europe after the 18th January 2018 would not be eligible to qualify under the scheme that aims to resettle 480 of the most vulnerable children from Europe. Since the amendment was passed in Parliament three years ago, just 220 children have been brought to the UK. The announcement from the Government follows sustained campaigning by child refugees charities Safe Passage, Help Refugees and supporters. 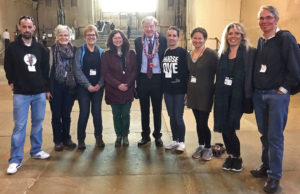 Day of Action at Parliament 24th October and Parliamentary Debate 2/11/17 ,  organised by Safe Passage’ ( https://safepassage.org.uk/) and ‘Help Refugees’. This national campaign, rally and lobbying of MPs at Parliament , which ExCoS participated in, coupled with the subsequent Parliamentary debate were aimed at putting the  #childrenofcalais and EU back on the political agenda.  200 lone child asylum seekers  were brought to safety here through the Dubs scheme from Calais last year and 20 of them presented a plaque to Lord Dubs during the Day of Action at parliament and thanked the UK Gov. and people. Sadly however not a single lone child asylum seeker arrived here between January and October ’17 under Dubs. The campaign sought to pressure the Government to fill all the remaining 280 ‘Dubs’ places they promised and to speed up the process of family reunification (Dublin 111).

As a result of this national campaign and follow up actions:

However since the demolition of the ‘jungle’ camp  in Oct’ (’16) hundreds of vulnerable, potentially eligible children continue to live near Calais in forests or risking their lives by continuing to make dangerous attempts to cross the Channel to reach the UK. There are reports of significant police harassment, use of pepper sprays and daily confiscation of clothing, sleeping bags, tents.  The situation in Greece, particularly on the islands like Lesvos, is very urgent again with UASCs being inappropriately detained for long periods with adults, often in terrible and unsafe conditions.

City of Sanctuary nationally made a very strongly worded statement in March ’17 on the closure of the ‘Dubs Amendment’ child relocation scheme:

‘We, in the City of Sanctuary network express our deep concern shared by many about the Government’s attitude to the refugee crisis and their lack of commitment to accommodating unaccompanied refugee children through the Dubs Amendment. We urge our supporters to be vigilant and continue building a vibrant network essential to provide welcome and safety to sanctuary seekers……………..

Last month the Government stated that only 150 more children would be accepted under the Dubs Amendment. However, data from local authorities shows that there are at least 368 spaces available. It is very concerning that many councils have reported that their offers to take more children were ignored by the Home Office.

Sadly, on the 7th March MPs voted 287–267 to close the Dubs Amendment, and to shut the door on about 3,000 unaccompanied asylum seeking children living without protection in Europe. This is quite a disturbing decision……..

Worst of all, the argument for upholding the cap of 350 children, is based on inaccurate information and politics of fear. Many councils have said they contacted the Home Office about available spaces and a willingness to take in child refugees, but were ignored.

Home Secretary Amber Rudd has perpetuated misinformed ideas by arguing that Dubs and other transfer schemes act as ‘pull factors’, that they promote the role of traffickers. These arguments are incorrect, and are used as excuses to neglect these young refugees.
Where is our moral compass, and compassion? We, in the city of sanctuary movement are concerned that if we do not stand up for these children, we will allow the UK government to decide that young unaccompanied children who have fled war and conflict seeking refuge in supposedly “safe” Europe, are not worthy of our help or care.”  City of Sanctuary, 15th March 17 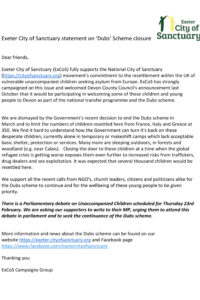 Safe Passage are working on the ground in Calais and other EU countries, seeking to open new legal and safe routes to safety for UASCs. They are working on ‘Family Re-Unification’ legal cases in France and Italy and have been campaigning nationally in the UK for  Dublin 111 and Dubs.

Last week Safe Passage showed Lord Alf Dubs around Calais, this is the first time he has visited since the Jungle was demolished 10-months ago.He was shocked to still find 100s of unaccompanied minors still sleeping rough with the constant threat of police violence. At the end of the trip we had a chance to ask him some of your questions. WATCH to find out how you can help raise the issue of child refugees on the political agenda this autumn.